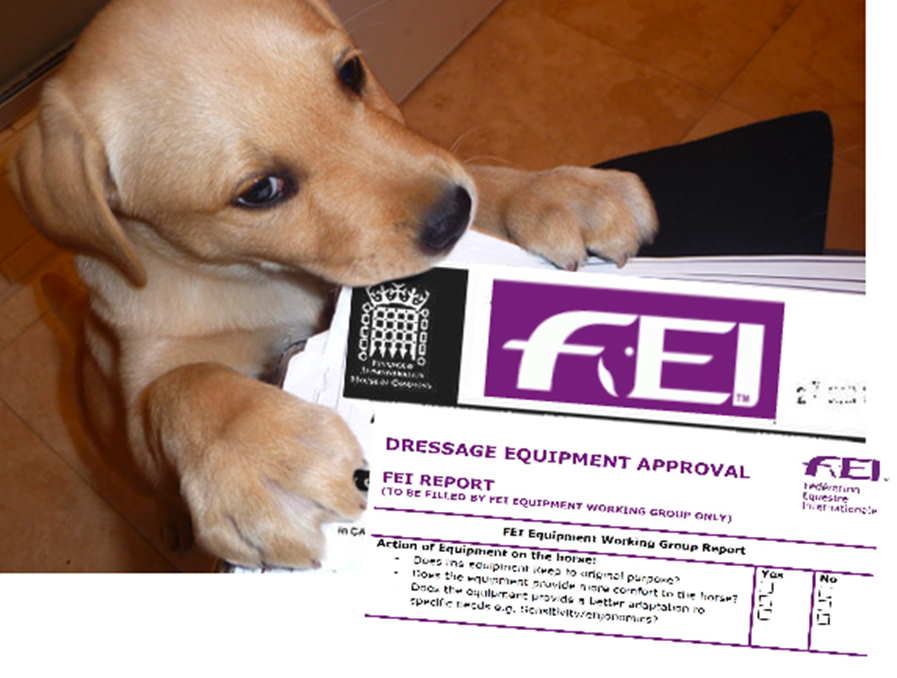 In response to the recent damning article, Broken or fixed: the FEI equipment approval process, the equestrian community has criticised attempts made by the FEI to cover up equipment testing scandals, likening those involved to a naughty schoolboy who claims: “the dog ate my homework.”

The FEI continues to make false claims in an attempt to cover up multiple equipment testing scandals involving lies, deception, corruption, and fraud.

The article written by well-respected journalist Mr. Andy Brown of the independent and world-renowned investigation company, The Sports Integrity Initiative, has further exposed to the equestrian community an outright violation of equipment testing rules and process and the FEI’s blatant disregard for horse welfare, rider safety and commitment to the truth.

The equestrian community has rightfully responded with outrage at the FEI.

The Response and Comments Following the Investigation and Article are Warranted:

What next are the FEI going to claim: The Dog ate the reports?”

The FEI officials involved have faced ongoing criticism from the equestrian community, including allegations of corruption, since 2014, when they repeatedly failed to follow the correct equipment testing rule and process in several cases of equipment testing, including the WTP Bit and STS Irons.

The FEI ruling stated that after equipment testing, the equipment company must be supplied with the equipment testing results form by the 30th of June. The form results must be filled in and signed by the FEI Equipment Working Group only, a process designed to eliminate corruption and promote fair commercial competition.

Mr. Adrian Morgante, the winner of 13 international awards for his revolutionary horse industry products and the inventor of the WTP Bit and STS Irons, says the equestrian community is rightfully concerned about corruption within the FEI. He fears the abolition of a transparent equipment testing process will continue to allow acts of corruption within the FEI to go unchecked, putting horse welfare and riders’ lives at risk.

Three legal firms, equestrian riders, and Mr. Morgante have been requesting the Equipment Working Group signed testing reports for more than four years. The FEI has not supplied a reason why they have not provided them. Further, the FEI has never claimed they couldn’t supply the Equipment Working Group signed reports because of any legal action pending.

However, when the highly acclaimed journalist Mr. Brown of The Sports Integrity Initiative asked for the WTP Bit and STS Irons testing reports, the FEI claimed they couldn’t supply them: ‘The FEI has filed a criminal complaint in Switzerland against him,’ wrote a FEI spokesperson in an email. ‘There is no lawsuit at this stage as the matter currently sits with the Prosecutor.’

Corruption is almost never simple, as those involved put complex mechanisms in place in order to avoid detection. If the FEI had no questions to answer about why certain equipment wasn’t approved, then why not publish its testing reports in full, or at least send them to an interested journalist when asked?

It is also significant that despite alleging that legal action is in process against Morgante, the FEI didn’t produce evidence that it has been filed. The threat of legal action can be an effective way of silencing complainants.

During four years of correspondence with the equipment manufacturers, the FEI has never claimed they couldn’t supply the Equipment Working Group signed and dated reports because of any legal action pending; they just ignored all requests without reason.

Legal opinion and an investigation were sourced regarding the FEI claims. In a FEI email on 3 July 2018, Mr. Mikael Rentsch from the FEI legal department stated that:

I hereby inform you that the FEI has filed a criminal complaint, receipt of which has been confirmed by the Swiss authorities. Accordingly, you will be hearing from their counterparts in Australia in due course.

We found the FEI claim contradictive as this was before the FEI supplied the false report on 25 July 2018 from the Chairman of the Dressage Committee, Mr. Frank Kemperman. Therefore, the FEI can provide the reports; unfortunately, for them, they submitted a fraudulent document and were caught out.

The FEI stated just recently to Mr. Brown it is with the prosecutor; however, we believe this to be a fabrication as there is no evidence of a complaint been filed with the Swiss authorities against Mr. Morgante or is sitting with a prosector for a decision. Further, as it would have been with the prosecutor before they filed the alleged complaint on 3 July 2018, sixteen months ago. It is understandable why Mr. Morgante has never been contacted, as the FEI would be compelled to provide the reports to him and the Swiss authorities, exposing the FEI lies and deception.

The FEI stated the WTP NP Bit has never been approved; however, when the FEI was asked the specific question, did the Equipment Working Group signed testing reports approve the bit, the FEI ignored the question: “WHY?” obviously because they did approve the bit.

On 20 August 2018, Ms. Power from the FEI legal department stated in an email:

You have been provided with a copy of the report of the Dressage Equipment Working Group. You seem to be under the impression that there are “signed rider reports”. However, no such reports exist nor were signed rider reports mentioned as part of the approval process.

Based on the FEI rules and process Ms. Power has lied.

Further, the report Ms. Power eluded to is the fake and backdated report she supplied from the Chairman of the Dressage Committee, Mr. Kemperman, on 25 July 2018. Further, the FEI informed Mr. Brown they could not provide the signed reports because of legal action pending with a prosecutor, a glaring contradiction.

Kemperman is not a member of the FEI’s Dressage testing group, yet he signed the 26 June testing Report supplied to Reynolds on 25 July, which Morgante alleges is fake. Kemperman’s signature has opened the FEI up to allegations

It’s time for the FEI Board to uphold and honour the FEI Constitution and their statements that transparency, horse welfare, and rider safety are paramount and cannot be compromised. The FEI Board and its stakeholders should compel the reluctant offenders to provide the reports or rectify the matter by approving the WTP NP Bit and the STS Irons for FEI competitions.

Additional Media Articles on This Matter